What happened this week?
Argentina. An earthquake has struck the north of Argentina near the border with Chile. It is the third earthquake to strike the region in the last few months with 6.4 and 6.2 magnitudes... Read more
Bolivia. A strong earthquake with a preliminary magnitude of 6.5 has struck a mountainous region in central Bolivia, with shaking felt in Sucre, Potosi, Padilla and other cities across the region, seismologists and residents said... Read more
Colombia. Unseasonal heavy rain strikes Huila causing several floods. At least one person is dead, 3 are missing and 2,000 have been displaced after heavy, unseasonal rainfall caused several flooding in central and western parts of Colombia between February 21 and 23, 2017. More heavy rain is expected over the weekend... Read more
Panama. A 4.7 earthquake caused skyscrapers in Panama's capital to sway Monday and led to the evacuation of some buildings. There were no immediate reports of injuries... Read more
Peru. The Minister of Education, Marilú Martens Cortés, reported that 430 educational institutions in the country suffered serious damage from the occurrence of rain and that all have been rehabilitated or are in that process, in order to ensure the beginning of the school year next March 13.... Read more
United States.
Interesting Facts

What the Oroville Dam Disaster Says About America’s Aging Infrastructure. The crisis, which exposed glaring weaknesses with the dam complex, also carries an important lesson for the nation: Increasingly, extreme weather driven by climate change is placing substantial stress on America’s aging infrastructure...Read more
Mexico City, on the verge of a water crisis. In 1900, when the Gran Canal de Desagüe was completed, it promised to solve the floods and drainage problems that had overwhelmed the city for centuries. Only it was not like, Mexico City was sinking. With the perpetual shortage of water, Mexico City has continued drilling for more, which has weakened the old clay beds and what has caused it to collapse even more....Read more
What's new in Disaster Risk Reduction?
Study reveals thousands of buildings in Victoria at risk of earthquake destruction. It’s only the second such analysis — after one by the District of North Vancouver in 2015 — conducted recently by communities in southwestern B.C. which are beginning to grapple with increasing scientific knowledge that a major earthquake will be devastating... Read more
Europe leads on resilient cultural heritage. Europe has launched a new drive to protect its heritage sites from the risk of disasters, an issue given added urgency by a string of earthquakes that wrecked age-old buildings in central Italy...Read more

Canadian Forces on guard for 'Big One' earthquake in B.C. The Canadian Armed Forces are prepared to deploy thousands of members if a catastrophic earthquake, colloquially known as The Big One, strikes the West Coast....Read more
Posted by risk-macc at 3:27 PM No comments:
Email ThisBlogThis!Share to TwitterShare to FacebookShare to Pinterest 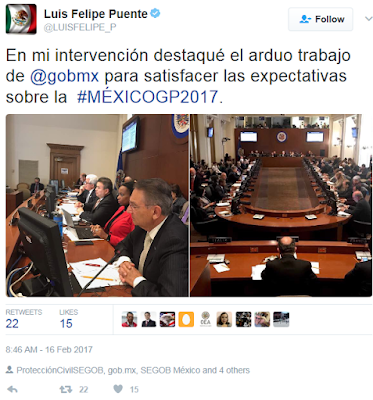 Yesterday during the Ordinary Session of The Permanent Council, Mister Luis Felipe Puente, National Civil Protection Coordinator of Mexico, spoke about preparations of the 5th Session of the Global Platform for Disaster Risk Reduction of American States; that will take place in Cancun, Mexico from 22 to 26 May, 2017. In his speech he highlighted the hard work of Mexico Government to meet expectations on the Platform...Read more
What happened this week?
United States.


Colombia. Catastrophe modeling firm AIR Worldwide (AIR) has been approved for use by domestic insurance companies in managing their earthquake risk by the country’s insurance regulator, the Superintendencia Financiera de Colombia... Read more


Can Artificial Intelligence Predict Earthquakes? Artificial intelligence is different from how scientists have attempted quake prediction in the past because of improved machine-learning algorithms and supercomputers as well as the ability to store and work with vastly greater amounts of data...Read more
Drones: The Next Tool for Humanitarian Workers. The former U.S. Ambassador Jack Chow, now a professor at Carnegie Mellon University, explains about how drones can be a resource for humanitarian workers by mitigating some of the challenges faced when delivering aid in some of the world’s most complex and dangerous operating environments....Read more


What 720,000 years of ice can tell us about climate change in the past — and the future? An Antarctic two-mile-long ice tube details changes in the Earth’s temperature, rainfall, and wind over hundreds of thousands of years...Read more
What's new in Disaster Risk Reduction?


Risk Award will honour hi-tech plan to beat disasters. Three cutting-edge plans to harness the power of technology and curb the threats posed by hazards such as floods and epidemics have been shortlisted for an international award that will be presented at the 2017 Global Platform for Disaster Risk Reduction... Read more
Santa Monica seeks to pass the nation's most extensive earthquake retrofit plan. Santa Monica is poised to require safety improvements to as many as 2,000 earthquake-vulnerable buildings in what would be the nation’s most extensive seismic retrofitting effort...Read more

Central Africa spurs disaster risk reduction. Collective action by regional organisations is a key means to help countries reduce their risk of disasters, and the Economic Community of Central African States is stepping up its efforts to rein in the impact of hazards amid rising pressure from climate change...Read more
Posted by risk-macc at 4:00 PM No comments:
Email ThisBlogThis!Share to TwitterShare to FacebookShare to Pinterest


Peru. Civil defense authorities in Peru say that flooding has affected over 90,000 people in the northern region of Piura since heavy rain began to fall on 30 January ... Read more


Earthquake early-warning systems finally becoming a reality. The technology already exists and could give West Coast residents up to 60 seconds of warning time, depending on how far they are from the epicenter of the quake...Read more


Drought identified as key to severity of West Nile virus epidemics. The study analyzed 15 years of data on human West Nile virus infections from across the United States and found that epidemics were much larger in drought years and in regions that had not suffered large epidemics in the past...Read more


How can the world reduce disaster losses for the poor? The World Bank has found that disasters cost the global economy $520 billion per annum when account is taken of the true impact on the poor of earthquakes, climate change, storms, floods and other hazards... Read more


Risk-prone Philippines steps up urban resilience. The Philippines, one of the most disaster risk-prone nations in the world, is stepping up efforts to ensure that its communities can withstand natural and human-induced hazards...Read more
Posted by risk-macc at 4:13 PM No comments:
Email ThisBlogThis!Share to TwitterShare to FacebookShare to Pinterest

What happened this week?
Chile. Wildfire Disaster fueled by Non-Indigenous Tree Plantations and over 238,000 hectares of forests in central and southern Chile have been burned according to the National Forestry Corporation. Ten people are dead as a result of what the Chilean government are calling the largest wildfire in Chile's history... Read more

Ecuador. 5.4 magnitude earthquake shakes Ecuador province affected in 2016 again. It happened in Atacames, Esmeraldas and a tsunami probability was discarded. A  tsunami simulation was being performed in Manabí and Esmeraldas while a 3.7 magnitude replica occurred... Read more
Interesting Facts
Prediction of large earthquake probability improved. Researchers of the Mathematics Research Centre (CRM) and the UAB have developed a mathematical law to explain the size distribution of earthquakes, even in the cases of large-scale ones... Read more

Tackling disaster reduces risk of conflict. The new UN Secretary-General, Mr. Antonio Guterres, has not wasted any time in higglighting the importance of disaster risk reduction for promoting peace and stability...Read more

Reducing disaster risk helps tackle hunger in Latin America and the Caribbean. More than 34 million people in Latin America and the Caribbean still suffer from hunger, but the region is boosting its ability to make agriculture sustainable and ensure food security by curbing disaster risk... Read more
Posted by risk-macc at 4:59 PM No comments:
Email ThisBlogThis!Share to TwitterShare to FacebookShare to Pinterest
Newer Posts Older Posts Home
Subscribe to: Posts (Atom)