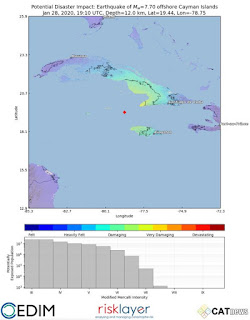 Massive earthquake below the sea in between Cuba and Jamaica - January 28, 2020. "Hazardous tsunami waves from this earthquake are possible within 300 km of the epicenter along the coasts of Jamaica... Cayman Islands and Cuba," the Center said.


The US Pacific Tsunami Warning Center said that based on all available data, waves reaching 0.3 to 1 meter above the tide level were possible for portions of Belize, Cuba, Honduras, Mexico, Cayman Islands and Jamaica.

M 7.7 - 125km NNW of Lucea, Jamaica: Seismotectonics of the Caribbean Region and Vicinity, reverse faults vs strike-slip faults. Along the northern margin of the Caribbean plate, the North America plate moves westwards with respect to the Caribbean plate at a velocity of approximately 20 mm/yr. Motion is accommodated along several major transform faults that extend eastward from Isla de Roatan to Haiti, including the Swan Island Fault and the Oriente Fault... Read more


Lessons for life: drills prepare students for tsunamis - UNDP. Partnering with the Government of Japan, UNDP began working with 90 schools to assess their tsunami risks, design emergency procedures and evacuation plans a carry out tsunami awareness and safety drills in 19 Asia Pacific countries in 2017. More than 100 schools and 60,000 people participated. 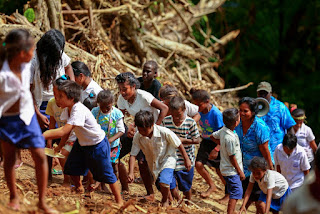 Two years on more than 107,756 students and teachers have taken part in the drills in 258 schools in 19 countries.
Teachers and students were trained so that they’re prepared when the next tsunami hits. As well as evacuation and safety drills, the project has identified at-risk schools and created a number of education materials, identified evacuation routes and shelters, and developed a mobile app, STEP-A, to assess preparedness, as well as a guide which shows school administrators how to prepare for, and respond to, a tsunami... Read more 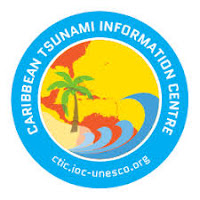 Caribbean Tsunami Information Centre (CTIC). The Caribbean Tsunami Information Centre (CTIC) is a partnership initiative between the Government of Barbados (GoB) and the Intergovernmental Oceanographic Commission of the United Nations Educational, Scientific and Cultural Organisation (UNESCO/IOC). CTIC was formally established on September 02, 2013 and initially hosted by the Department of Emergency Management (DEM), Barbados. It is now hosted by the Coastal Zone Management Unit under the auspices of the Ministry of the Environment and Drainage, Barbados. The United Nations Development Programme (UNDP), Barbados and the OECS also provides administrative oversight and human resource management support to the CTIC through the UN Agency to UN Agency agreement framework. CTIC is an organ of the Intergovernmental Coordinating Group for the Tsunami and Other Coastal Hazards Warning System for the Caribbean and Adjacent Regions (ICG/CARIBE EWS)... Read more 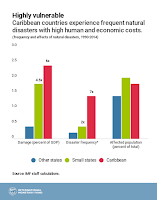 Building Resilience to Natural Disasters in the Caribbean Requires Greater Preparedness. Natural disasters in the Caribbean are becoming more ferocious and frequent even relative to small states. The recent devastations of Category 5 hurricanes Maria and Irma (both in September 2017) demonstrate how powerful storms can lead to widespread destruction, loss of life, and weaker economic growth prospects.
For some disasters, damages well exceed the size of the economy—Dominica, for example, suffered damages amounting to 226 percent of GDP when it was devastated by hurricane Maria. That means that it would take Dominica's output at least 5 years to recover to pre-hurricane levels... Read more

Combined financing for better protection of the Caribbean. Panama City, Panama, January 3, 2020 - Threatened by increasingly violent hurricanes, the costs that Caribbean countries have to cover to avoid better protection from disasters continue to grow. In this sense, in Caribbean countries they will depend on the financing options that allow them to face the challenges, explain the experts who gathered at the Conference on Integral Disaster Management (# CDM11) in Sint Marteen, organized by the Agency of Emergencies and Disasters of the Caribbean (CDEMA).
In the same way, promoting economic growth, public investment, the expansion of insurance and disaster funds, and the alliance with the private sector affected are some of the initiatives that could be of help to those countries that most need to invest in resilience. "Taking into account disasters in the elaboration of public investment budgets should be an essential condition for all of us," said Silveria Jacobs, Prime Minister of Sint Marteen, an island devastated by Hurricane Irma in 2017... Read more 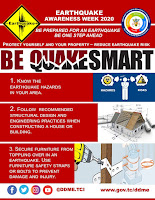 Public Notice: Earthquake Awareness Week to be Observed 12th - 18th January 2020. The Department of Disaster Management and Emergencies (DDME) will observe Earthquake Awareness Week on 12th - 18th January, 2020. The intention is to sensitize residents and visitors to ensure they can effectively respond to an earthquake event. In addition, the DDME aims to strengthen the Earthquake Preparedness and Response Capacity of the Disaster Management System, by building resilience to earthquake impacts at the National and Community Level... Read more

Posted by risk-macc at 10:58 AM No comments:
Email ThisBlogThis!Share to TwitterShare to FacebookShare to Pinterest
Newer Posts Older Posts Home
Subscribe to: Posts (Atom)