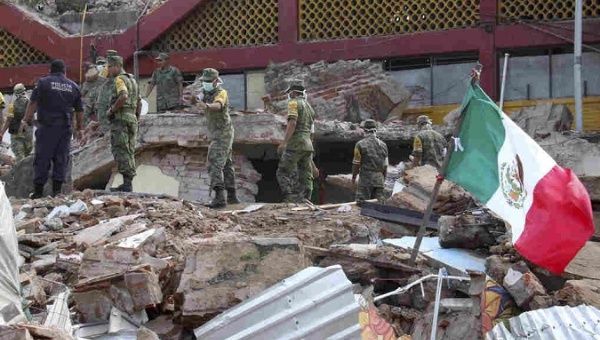 A 7.2 magnitude earthquake hit Oaxaca on February 16th, with its epicenter close to Pinotepa Nacional and Santiago Jamiltepec. Authorities in Oaxaca, Mexico are requesting emergency funds to supply food, shelter and health services in more than 30 municipalities that are still recovering from the Sept. 2017 earthquakes. At least 1,000 homes were damaged and Mexico City Mayor Miguel Angel Mancera Espinosa said rebuilding would take up to six years after the city was struck by a 8.2 magnitude earthquake last September, which left more than 300 dead... Read more


How rising temperatures and changes in climate can impact the aviation industry and air travel. 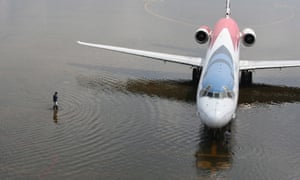 As temperatures increase and weather becomes more extreme, the aviation industry must adapt to changes both in the air and on the ground. Not only can higher temperatures  bring about severe consequences for aircraft take-off performance, but also changes in the jet stream when flying across the Atlantic could result in increased flight delays and turbulence ... Read more

Forests are losing their resilience to wildfires as warming climates are impacting post-fire tree regeneration. 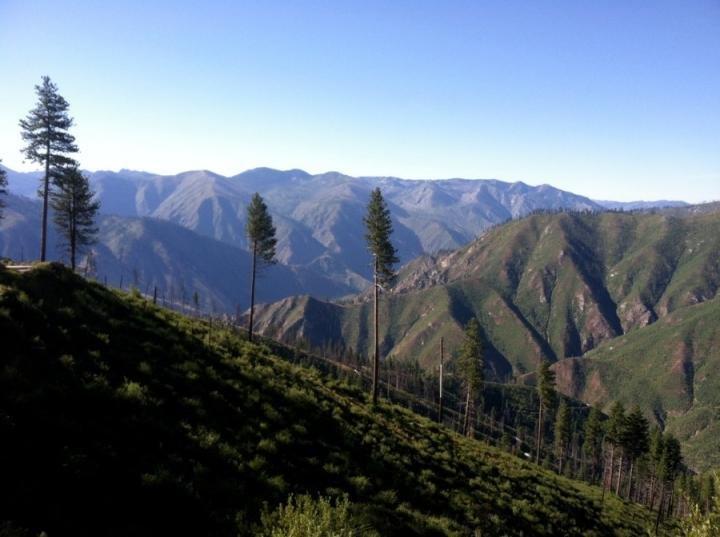 A new study on the resilience of Rocky Mountain forests, led by Colorado State University scientists, found significant decreases in tree regeneration following 21st century wildfires. Historically, the look of forests changes over time, but according to research it will take much longer for sites to re-establish forests after a wildfire, if they return at all.  The study shows the pattern of reduced tree regeneration emerge consistently across all the sites ... Read more  Link to research paper

Earthquake early warning: How the U.S. trails Mexico in potential life-saver
A magnitude 5.9 earthquake in southern Mexico early Monday appeared to be an aftershock from a 7.2-magnitude temblor that hit Friday. Both triggered seismic alarms that echoed across the capital, giving people a head start of 30 seconds to a minute to take cover or exit an unsafe building. Mexico built its system in response to an earthquake that devastated the capital in 1985, killing an estimated 10,000 people... Read more 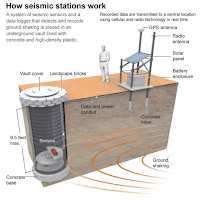 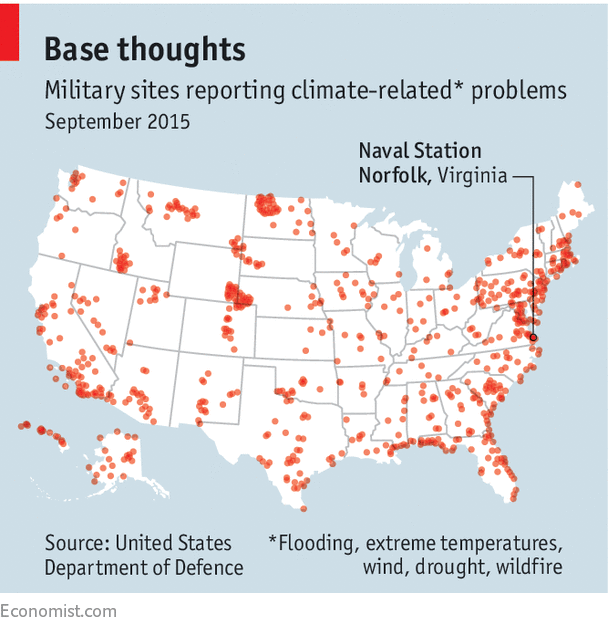 One arm of the Trump administration thinks climate change is a security threat.
A report published on January 26th by the Department of Defence (DoD) found that more than half of the 3,500 military sites surveyed are already reporting climate-related problems. Droughts are leading to water shortages, heatwaves are causing some live-fire exercises to be cancelled and shifting wind patterns are disrupting aircraft sorties. In addition, critical outposts abroad are similarly vulnerable. Twenty years from now a new $1bn radar installed on the Marshall Islands could be under water. Diego Garcia, a staging post on an Indian Ocean atoll crucial for operations in the Persian Gulf, may be submerged too... Read more
Posted by risk-macc at 2:34 PM No comments:
Email ThisBlogThis!Share to TwitterShare to FacebookShare to Pinterest


Authorities of Salta, Argentina, thank the Paraguayan National Government for their relief efforts of the Pilcomayo flood.

Moisés Balderrama, the mayor of Santa Victoria Este of the Salta Province of Argentina thanked the Paraguayan Government for its support through the National Emergency Secretariat (Secretaría de Emergencia Nacional; SEN), in regards to the flood that was aggravated by the intense rain on the municipality. The flood had put approximately 10,000 people at risk, causing many to evacuate their homes. SEN had sent food and supplies to be used in the shelters... Read more


The future of flood mapping: Making a difference in flood response and modeling

The Dartmouth Flood Observatory takes geographic information systems (GIS) and combines it with remote sensing from satellite imagery to create interactive online maps that show how much flooding is occurring in certain areas around the world. Researchers say that overlaying data involving population or agriculture statistics in certain areas may help to better understand the impact of flooding. In addition, simply recording data from presently flooded areas can be useful when identifying areas at risk of future flooding... Read more

Projecting the impacts of climate change - MIT Joint Program researchers advocate for improved modeling approach.  Today’s gold standard for climate impact assessments — model intercomparison projects (MIPs) — fall short in many ways.Its highly dispersed and inflexible modeling approach makes it difficult to produce consistent and timely climate impact assessments under changing economic and environmental policies. In addition, MIPs focus on a single economic sector at a time and do not represent feedbacks among sectors, thus degrading their ability to produce accurate projections of climate impacts and meaningful comparisons of those impacts across multiple sectors.
To overcome these drawbacks, researchers at the MIT Joint Program on the Science and Policy of Global Change propose an alternative method that only a handful of other groups are now pursuing: a self-consistent modeling framework to assess climate impacts across multiple regions and sectors.  ... Read more 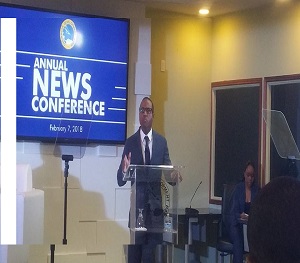 Despite the negative growth of an estimated 6.4% in Dominica due to Hurricane Maria in 2017, Dominica's economy is projected to grow by 6.9% in 2018. Since the devastation wrought by Hurricanes Maria and Irma, the Government of Dominica has set in motion the goal of becoming the first climate resilient nation in the world.  Considering the impact of environmental vulnerability of the region, the Caribbean Development Bank is also placing emphasis on building resilience by prioritizing disaster risk management. ... Read more

Posted by risk-macc at 4:46 PM No comments:
Email ThisBlogThis!Share to TwitterShare to FacebookShare to Pinterest 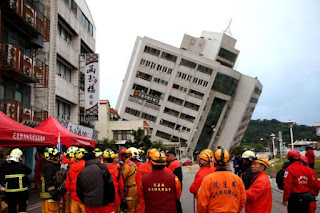 What's an 'Earthquake Swarm,' And Is One Hitting Taiwan?
A magnitude-6.4 earthquake shook northeastern Taiwan Tuesday night, killing at least seven people and injuring more than 250 others. More than 100 aftershocks have been reported to rattle the region. Some experts are calling the disaster an "earthquake swarm," but others are more hesitant... Read more

Climate change will limit where the Winter Olympics can be held

According to a study led by the University of Waterloo, climate change is threatening the viability of the Winter Olympics. The study concludes that if global greenhouse gas emissions are not dramatically reduced, only eight of the 21 cities that have previously hosted the Winter Olympics will be cold enough to host them by the end of the century... Read more

How does new information about climate change impact our existing beliefs?
Professor Cass Sunstein from Harvard Law School talks about how exposure to varied scientific evidence about climate change may increase polarization within a population due to asymmetrical updating. According to his study, it was found that people with strong beliefs in climate change show asymmetrical updating, changing their beliefs more in response to bad news than good news. On the other hand, those with weaker climate change beliefs show the opposite, changing their beliefs more in response to good news than bad news.The findings have implications for how people will update their beliefs about not only climate change, but also for beliefs about science, politics, and law in general...Link to audio,   Link to research paper via SSRN 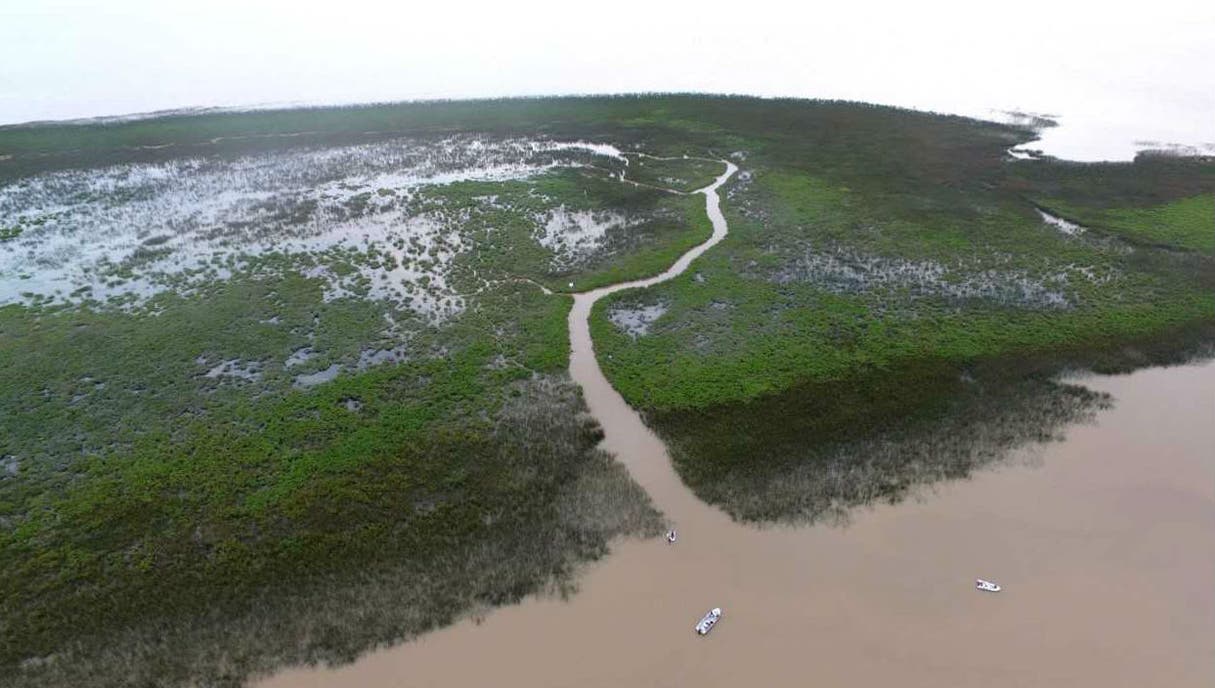 Two newly formed islands in front of the San Isidro coasts of Río de la Plata (a.k.a. La Plata River or River Plate) to be declared as natural reserves.
Two islands are being formed at the junction of San Antonio and Luján canals and experts are saying that this accelerated appearance is due to the changes in sedimentation of the Paraná and Bermejo rivers and land use. Normally, this phenomenon would take hundreds of years in its natural course... Read more

The Pacific Alliance, evolving into a regional integration in risk management.   Latin America and the Caribbean has one of the lowest rates of insurance coverage worldwide. However, the Latin American and Caribbean governments are increasingly investing more resources into the identification and reduction of risks, as well as to financial protection of emergency response and relief. One way to do this is through bonds that function as disaster insurance that transfers governments' risk to the markets... Read more

Posted by risk-macc at 3:40 PM No comments:
Email ThisBlogThis!Share to TwitterShare to FacebookShare to Pinterest 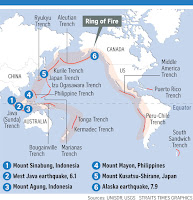 Eclipse 2018: Earthquake in Afghanistan – was it due to the Super Blue Blood Moon?
Despite the long-held belief that the full moon having the strongest tidal pull can also place more stress on the Earth’s crust and increase the chance of a fault line slipping, seismologist Dr. Hough of the US Geological Survey has concluded that this belief has no basis after matching dates and lunar phases to more than 400 earthquakes of magnitude 8 or larger... Read more

How social media is reshaping disaster rescue.
Research from the University of Queenland Business School found that social media can help rescuers respond more quickly and effectively.Using social media, officials can now communicate with the public directly and people can post real-time local updates, which allows officials to better understand what is happening and make more informed decisions about deploying aid... Read more

Meet the millennial everyone calls when disaster strikes.
She was appointed to the FEMA National Advisory Council in a first-of-its-kind role – the Emerging Leader seat – inside the Department of Homeland Security in 2016. She specializes in utilizing current and emerging technologies to mobilize targeted global response efforts. Her work today sits at the perfect intersection of innovative technology and compassionate humanitarianism... Read more

Months after hurricanes Irma and Maria had devastated Puerto Rico and still as of today, only 60 percent of Puerto Rico’s population has access to reliable electric power. Access to potable water is compromised, food and jobs are scarce, and houses continue to be uninhabitable.
Ineffective management of federal agencies, the Congress’ discriminatory policies toward Puerto Rico and the Puerto Rican government’s ineptitude at addressing local corruption are just some factors that are escalating Puerto Rico to a man-made catastrophe... Read more