Chile. Antofagasta, Atacama, and Coquimbo: Flash flooding generated by intense rains related to a cold front that affects the northern area of the country and that causing rivers to breach their banks. Seven reported deaths and the 19 missing, nearly 500 homes affected, 35 destroyed and nearly 2000 people in shelters. Atacama is the region that has been primarily affected. According to authorities (ONEMI), the most critical areas affected in Atacama are located in Chañaral, Copiapó, Alto del Carmen and Tierra Amarilla. Damage assessment is in progress but access and communication difficulty hinders data collection. Several hospitals have reported damages and are only partially functioning. The Ministry of Health evaluates the situation of the assistance network and issues adjustments in the services network and a Sanitary Alert in Atacama and recommendations. A State of Emergency decree has been issued for the current emergency... Read More

Ecuador. De Los Rios Province: Areas of Babahoyo and nearby localities flooded after 8 hours of intense rain.   Areas of the center and the periphery were flooded yesterday. The Prefecture, Social Security, terrestrial terminal among others buildings were affected by the floods... Read More

Ecuador. Via Aloag-Santo Domingo: Landslide site that killed 5 people is declared a cemetery.  The bodies cannot be rescued as the site is not safe.  A total are 13 fatal victims including two people in the parish Alluriquín... Read More

3D satellite, GPS earthquake maps isolate impacts in real time. New research shows that GPS and satellite data can be used in a real-time, coordinated effort to fully characterize a fault line within 24 hours of an earthquake, ensuring that aid is delivered faster and more accurately than ever before... Read More

Local and regional authorities key partners in disaster risk reduction.
The United Nations World Conference on Disaster Risk Reduction, resulted in a historic agreement by the international community to reduce disaster risk, and recognized local authorities and the local level as essential to achieving this... Read More

Landslice project provides a model for the prevention of the risk for landslides in Europe. Landslide project, has been recently presented. It aims to prevent and mitigate the risk of hydrogeological instability that has progressively increased in Europe... Read More
Posted by risk-macc at 5:31 PM No comments:
Email ThisBlogThis!Share to TwitterShare to FacebookShare to Pinterest

After over 30 hours of negotiations, a new global framework for disaster risk reduction is finally adopted by 187 UN member states at the UN World Conference on Disaster Risk Reduction in Sendai, Japan... Read More

Mexico: Floods. The governor of Michoacán, Salvador Jara Guerrero, reported on Monday that at least 850 homes turned out damaged and some 3,000 people affected in the municipalities of Morelia, Zamora and Apatzingán, due to the rains of the last three days... Read More

Chile: Wild Fire, Valparaiso. 572 hectares of the outskirts of the City have been consumed since Friday. There are no reports of people affected or damages to homes. In the early hours of Saturday it forced the authorities to evacuate some 7,000 people of their homes. A person is reported to be dead and 33 injured people, of which 18 belong to the Fire Department...Read More

Brazil: Drought. The National Secretariat of Defense, Civil Defense and the Ministry of National Integration have declared Emergency due to the drought in Alto Alegre, Amajari, Iracema, and Mucajaí, in Roraima. This will assist the process of reestablishing essential services and advancing the actions necessary for the response... Read More


Canada: Snowstorm. For the second time in three days a large storm is battering parts of Atlantic Canada with snow and high winds, with up to 50 centimeters of snow reported in some regions of Nova Scotia. Halifax is almost completely shut down, with all transit pulled off the roads and government buildings and universities closed for the day... Read More

A healthy society is a disaster resilient society.  Disasters are usually measured by the number of deaths, injuries and damage to property that they cause. But, do these measures truly express the magnitude of damage to people’s health and quality of life?... Read More

Death, destruction and displacement wrought by natural disasters would be significantly reduced by 2030 under a new framework adopted by countries attending the Third United Nations World Conference on Disaster Risk Reduction, in Sendai, Japan, where they also affirmed the “urgent and critical need” to anticipate, plan for and reduce such risk to more effectively protect people, communities and countries, and to build resilience... Read More

Women are key in tackling disaster: UN officials. Women are far more exposed to disasters than men given their frontline roles in the home and in healthcare, the UN says, arguing that improving gender equality is key to saving lives... Read More


Posted by risk-macc at 5:30 PM No comments:
Email ThisBlogThis!Share to TwitterShare to FacebookShare to Pinterest

Colombia: Earthquake. A 6.6-magnitude earthquake (Richter scale) shook Colombia the afternoon of 10 March 2015. The epicenter was located 7.4 km from the municipality of Los Santos, department of Santander, with a depth of 161 km. Four municipalities in eight departments have reported some type of damage. At least 140 houses in the Betulia municipality of the department of Santander (25 km from Los Santos) suffered damage, some may not be safe... Read More

System to quickly search for survivors after disasters. A system that quickly searches for the victims after disasters such as earthquakes and landslides. To achieve this, the system combines data from, for instance, satellites, drones, robots and sensors able to detect mobile phones, and use this information to create a 3D image of the disaster site... Read More

The Connection Between Central American Farmers and Deadlier Tornadoes in the U.S. Scientists link smoke from the burning of agricultural fields to more intense twisters... Read More

Building a New Framework for Disaster Risk Reduction. Over 9,000 people are gathering in Sendai, Japan, this week for the World Conference on Disaster Risk Reduction with the goal of launching a new international framework to guide implementation of disaster risk management efforts worldwide in years to come... Read More

Posted by risk-macc at 5:14 PM No comments:
Email ThisBlogThis!Share to TwitterShare to FacebookShare to Pinterest 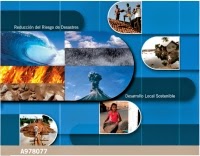 Objectives of the Course
• Foster policies and actions for disaster risk reduction and its application for the adaptation of climate change, within the framework of processes sustainable local development and strengthening participatory strategic planning.
• Share and develop knowledge and practical tools that will make the management and reduction of risk an integral part of local development efforts.
• Strengthen the capacity of key players and the local socio- economics actors to participate in reducing of risk disasters and climate change on their territory.
• Promote experience-sharing, cooperation and the stocktaking of best practices....Read More

Brazil: Floods. Authorities from the Ministry inspect municipalities affected by the Rio Acre flooding. National Integration will send 17,000 Emergency care kits, tents and mineral water, in addition technical crews to assist in the recovery of the cities... Read More

Ecuador: Manabí, Floods, and Drought. The Emergency Operations Committee (COE) was activated in order to request assistance for more than 2,000 residents from Julcuy and also to rescue some 600 cattle that still subsist despite the drought, there are about 30 cattle that have died... Read More

Argentina: Floods, 8 provinces are in alert with more than 5,000 evacuees in the center of the country. MOH is conducting vector control in the affected areas of Sierra Chicas, also 13 thousand vaccines were already provided...Read More

Chile: Volcanic activity. Volcano Villarrica maintains the level of volcanic technical alert in Red, in addition delimits an area of 10 km of radio as of exclusion. Furthermore, ONEMI maintains a Yellow Alert for the rest of the massive; there are a total of 210 people in temporary shelters...Read More

Scientists find oddly behaving 'inner-inner core' at Earth's center. Using the coda waves from earthquakes, geologists have discovered that our planet's core isn't quite what we thought it was... Read More

Scientists say some quakes may be predictable. For the past 20 years, getting an earthquake scientist to utter the word “prediction” has been about as tough as getting a biologist to endorse the existence of Bigfoot... Read More

States, donors must do more to tackle rising disaster risk: U.N.As economic losses from disasters rise around the world, more effort is needed to reduce the risks from extreme weather and earthquakes in every area, from infrastructure to health...Read More