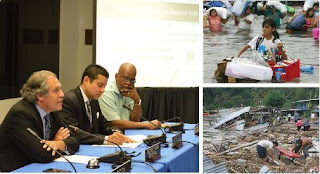 Belize: Hurricane Earl impacts Belize: Category 1 Hurricane, Earl, struck Belize early Thursday morning. The National Emergency Management Organization (NEMO) has declared an ALL CLEAR for the country. However, major infrastructure and building damage has been reported in addition to blocked roads due to high water levels. Flash flooding has been reported in the Cayo District and communities along the Macal and Mopan Rivers have advised to seek higher ground immediately. Cleanup of the highways is in progress. 29 shelters have been made available housing 907 people... Read more

Korea gives US$10 million boost to Sendai Framework implementation. The UN Office for Disaster Risk Reduction has signed a five-year, US$10 million agreement with the Ministry of Public Safety and Security and Incheon Metropolitan City of the Republic of Korea to support education and training for disaster risk reduction... Read more