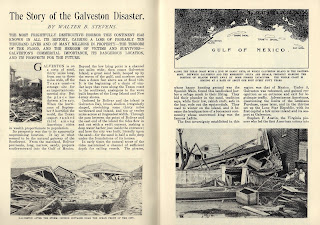 As we embrace for hurricane Harvey, we remember the deadliest natural disaster in American history, the Galveston Hurricane of 1900 that killed over thousand people and brought forth a new focus on the study of hurricane prediction. On September 8, 1900, a horrific hurricane slammed into the city. Wind speeds surpassed 135 miles per hour, making it a category 4 on the Saffir-Simpson Hurricane Wind Scale.  Storm surges rose 15 feet and, within hours, estimates of 6,000 to 12,000 unwary people were killed and over 3,600 buildings were destroyed. The Galveston Hurricane remains the deadliest natural disaster in United States history. ... Read more
What happened this week?


'Life-threatening' rainfall expected in Texas, hurricane center says. (CNN) Highways in Texas filled with cars Thursday into the night as coastal residents made their way north and out of the path of a hurricane that forecasters say will bring "life-threatening" amounts of rain ... Read more

A Texas-size flood threatens the Gulf Coast, and we’re so not ready. (GRIST) Aug 23. After a period of rapid intensification overnight, the National Hurricane Center upgraded Harvey to hurricane status at noon central time on Thursday. The storm is now expected to reach the coastline near Corpus Christi, Texas, late Friday as a major hurricane — the first U.S. landfall of a Category 3 or stronger hurricane since 2005 ... Read more


Meyerland residents know they'll flood and are ready for the storm. MEYERLAND, Texas (KTRK) — A backhoe sits along the banks of Brays Bayou in Meyerland, where construction has been happening for nearly a month. Workers are widening 21 miles of Brays Bayou. It is part of a city project to reduce flooding in south Harris County ... Read more

Posted by risk-macc at 4:26 PM No comments:
Email ThisBlogThis!Share to TwitterShare to FacebookShare to Pinterest 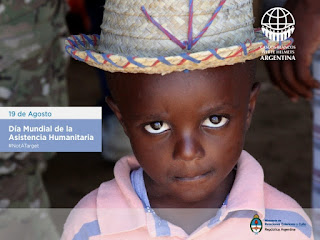 Last Saturday, August 19th, the World Humanitarian Day (WHD) was celebrated all around the globe, paying tribute to all men and women who volunteer their time and that of their families' and risk their lives to help those affected by disasters and humanitarian crisis.

The General Secretariat of the OAS is proud to support the OAS - White Helmets Program that in collaboration with the Argentine White Helmets Commission of the Ministry of Foreign Affairs and Culture provides disaster relief and humanitarian assistance to OAS Member States in need, and training for the establishment of national volunteering systems.

Here is the message from the Minister of Foreign Affairs of Argentina, Ambassador Jorge Faurie (English subtitles) ... See video

See also the testimonies from volunteers of the Argentine White Helmets (English subtitles) ... See video
Posted by risk-macc at 4:04 PM No comments:
Email ThisBlogThis!Share to TwitterShare to FacebookShare to Pinterest

World Humanitarian Day (WHD) is held every year on August 19th to pay tribute to aid workers who risk their lives in humanitarian service and to rally support for people affected by crises around the world.
Every year, disasters cause immense suffering for millions of people – usually the world's poorest, most marginalized and vulnerable individuals. Humanitarian aid workers strive to provide life-saving assistance and long term rehabilitation to disaster-affected communities, regardless of where they are in the world and without discrimination based on nationality, social group, religion, sex, race or any other factor.
This year, the Geneva World Humanitarian Day commemoration is organized in collaboration with the International Committee of the Red Cross (ICRC), Médecins Sans Frontières (MSF), the United Nations Office for the Coordination of Humanitarian Affairs (OCHA) and the United Nations Office at Geneva (UNOG).
The commemoration will include a panel discussion on “Violence against health care and its implications for affected populations, humanitarian workers, and aid”, and WHO Director-General Dr Tedros Adhanom Ghebreyesus will give introductory remarks at the formal programme held at the Palais des Nations on Monday, 21 August 2017.


UW gets in on $4.9 million boost for ShakeAlert earthquake warning system. The University of Washington and six other research institutions will benefit from $4.9 million in funding from the U.S. Geological Survey for the ShakeAlert earthquake warning system, which could eventually provide precious seconds of advance notice that a seismic shock is coming … Read more

Posted by risk-macc at 5:01 PM No comments:
Email ThisBlogThis!Share to TwitterShare to FacebookShare to Pinterest

Tropical Storm Franklin makes landfall in Mexico. (CNN)Tropical Storm Franklin made landfall on the eastern coast of Mexico's Yucatan Peninsula late Monday, according to the National Hurricane Center. Franklin moved inland with maximum sustained winds of about 60 mph ... Read more
Hurricane Franklin Brought Heavy Rain To Mexico (RECAP). Franklin made landfall as a hurricane in eastern Mexico overnight on August 10th and rapidly weakened to a remnant low over the highest terrain Thursday morning ... Read more
Two tornadoes have hit Maryland in two weeks. Is this normal? It turns out all of this tornado activity (in the DC area) isn’t some sort of freak anomaly, but rather par for the course for our region. ... Read more

What's the difference between a Tornado Watch and Tornado Warning? (OHIO) WOIO - The National Weather Service encourages people to move to an interior room on the lowest floor of a sturdy building during a tornado watch. ... Read more

Posted by risk-macc at 3:34 PM No comments:
Email ThisBlogThis!Share to TwitterShare to FacebookShare to Pinterest


Historic Drought Hammers Dakotas, Montana. Crops in the Dakotas and Montana are baking on an anvil of severe drought and extreme heat, as bone-dry conditions force growers and ranchers to make difficult decisions regarding cattle, corn and wheat ... Read more

Drought Spreads and Intensifies Across U.S. Northern Plains. The drought plaguing eastern Montana and much of North and South Dakota came on quickly and is intensifying, leading ranchers to sell their cattle and farmers to harvest early whatever crops that have grown so far this summer ... Read more

Severe Thunderstorms Top the List of Climate Disasters So Far This Year. During the first half of 2017, a series of extremely powerful thunderstorm outbreaks with damaging hail and tornadoes caused $41 billion of damage in the U.S., according to a new report from Munich Re, a German reinsurance company that tracks and analyzes natural disasters. So far this year there have been six severe, large-scale thunderstorm outbreaks, each causing billions of dollars in losses ... Read more

Ottawa County Senior Companions get tornado disaster training. MIAMI - Senior Companion Program volunteers are trained and ready to help their clients with many needs. The focus of the training is preparing for severe storms and tornadoes. Insulated ... Read more
Technology would change Edmonton's tornado response today. Thirty years ago, Edmonton Coun. Ed Gibbons was pacing up and down his Clareview driveway, waiting and hoping his children would arrive home safely ... Read more